We are so excited to share this insightful print and digital feature by The WELDER. Read the full story below, on The WELDER’s website, or in the digital magazine! 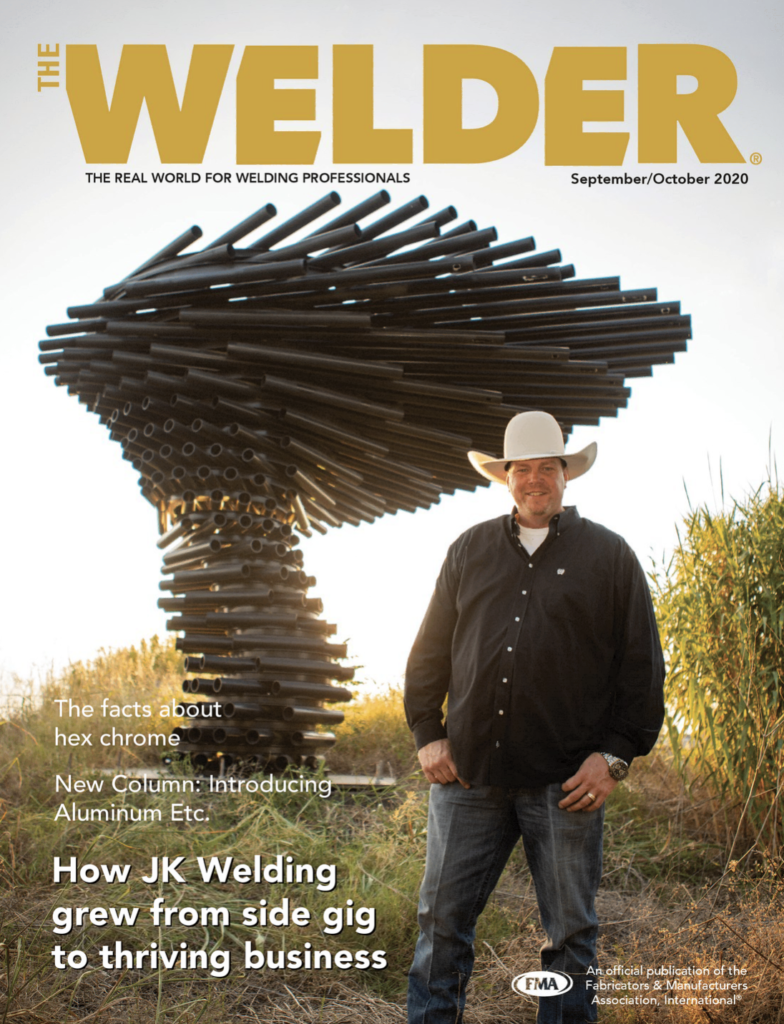 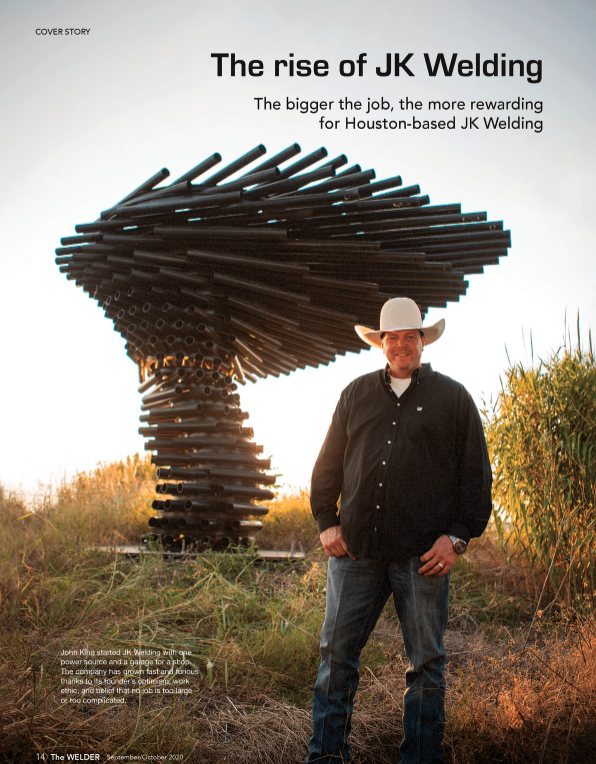 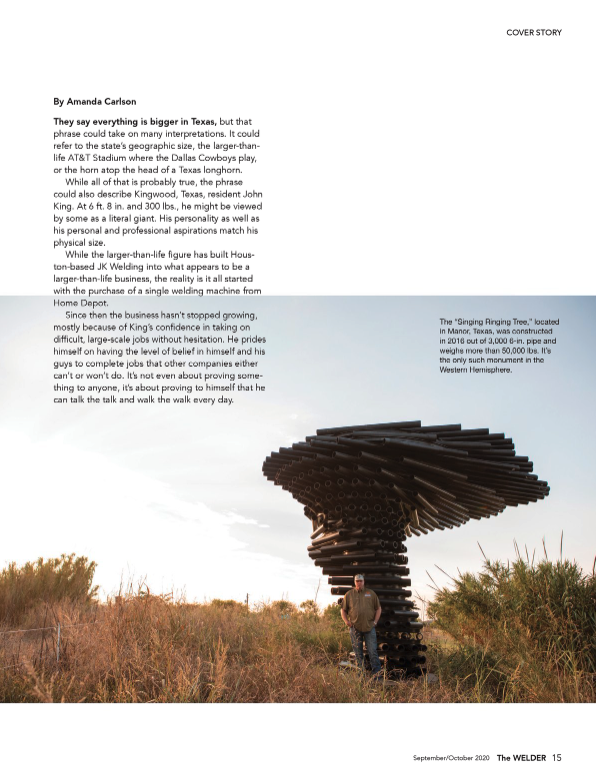 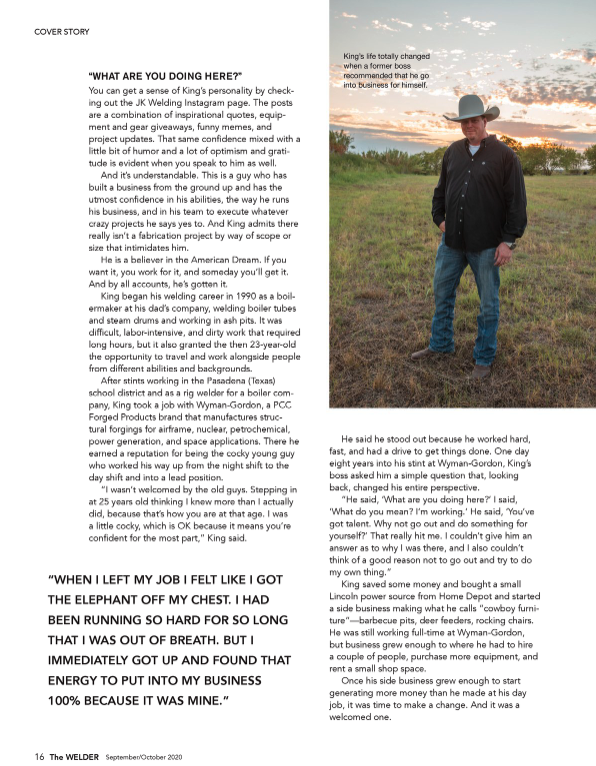 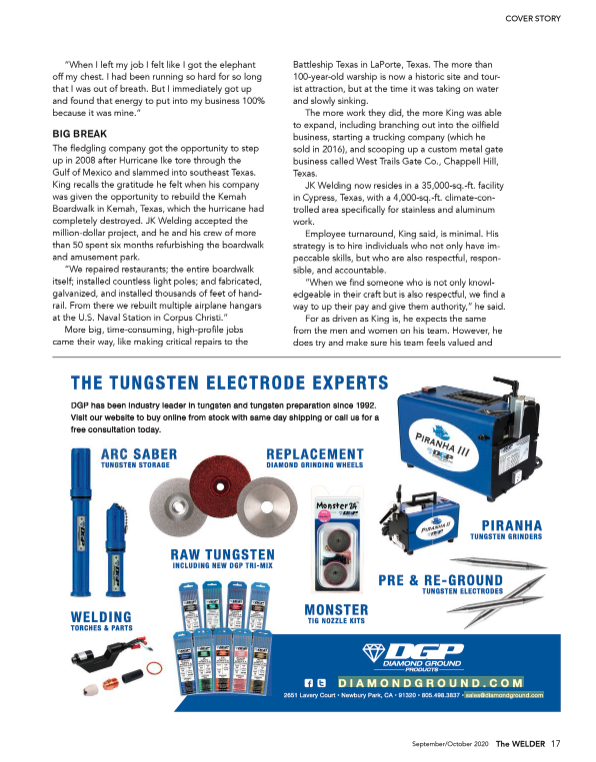 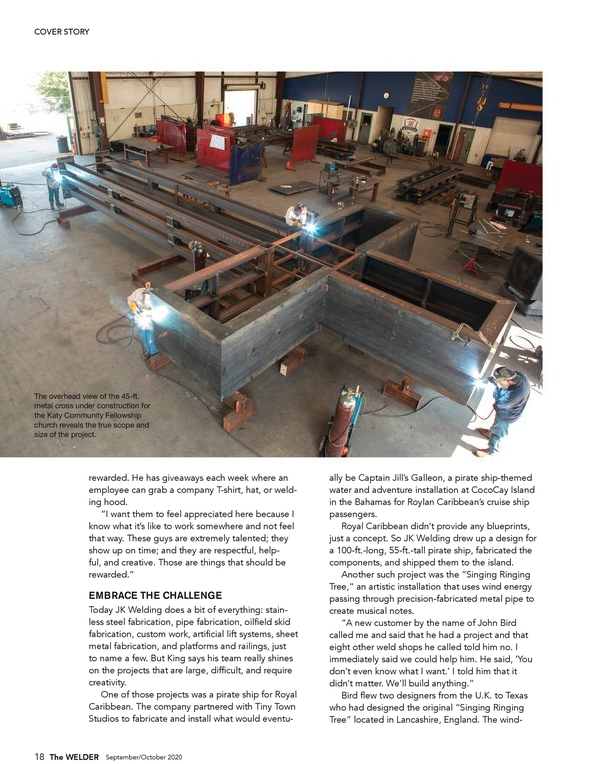 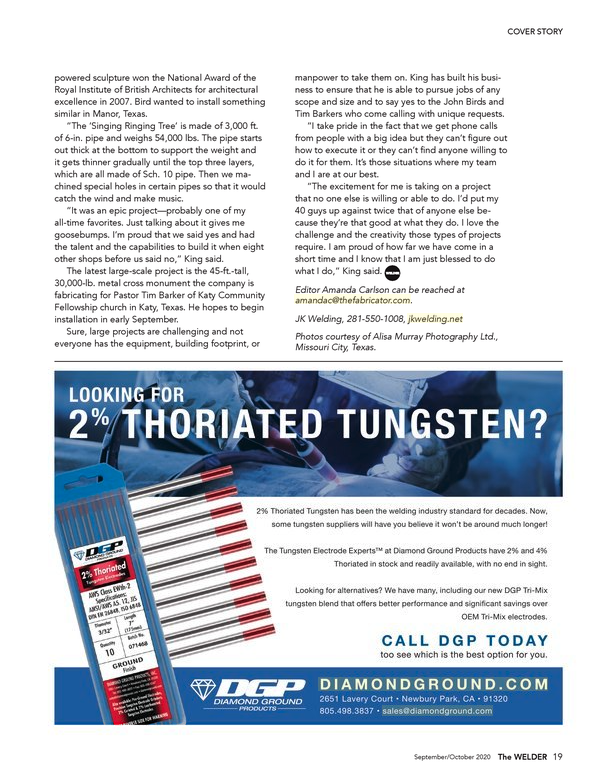 From pipe fabrication to metal art, the bigger the job, the more rewarding for founder John King.

They say everything is bigger in Texas, but that phrase could take on many interpretations. It could refer to the state’s geographic size, the larger-than-life AT&T Stadium where the Dallas Cowboys play, or the horn atop the head of a Texas longhorn.

While all of that is probably true, the phrase could also describe Kingwood, Texas, resident John King. At 6 ft. 8 in. and 300 lbs., he might be viewed by some as a literal giant. His personality as well as his personal and professional aspirations match his physical size.

While the larger-than-life figure has built Houston-based JK Welding into what appears to be a larger-than-life business, the reality is it all started with the purchase of a single welding machine from Home Depot.

Since then the business hasn’t stopped growing, mostly because of King’s confidence in taking on difficult, large-scale jobs without hesitation. He prides himself on having the level of belief in himself and his guys to complete jobs that other companies either can’t or won’t do. It’s not even about proving something to anyone, it’s about proving to himself that he can talk the talk and walk the walk every day.

“What Are You Doing Here?”

You can get a sense of King’s personality by checking out the JK Welding Instagram page. The posts are a combination of inspirational quotes, equipment and gear giveaways, funny memes, and project updates. That same confidence mixed with a little bit of humor and a lot of optimism and gratitude is evident when you speak to him as well.

And it’s understandable. This is a guy who has built a business from the ground up and has the utmost confidence in his abilities, the way he runs his business, and in his team to execute whatever crazy projects he says yes to. And King admits there really isn’t a fabrication project by way of scope or size that intimidates him.

He is a believer in the American Dream. If you want it, you work for it, and someday you’ll get it. And by all accounts, he’s gotten it.

King began his welding career in 1990 as a boilermaker at his dad’s company, welding boiler tubes and steam drums and working in ash pits. It was difficult, labor-intensive, and dirty work that required long hours, but it also granted the then 23-year-old the opportunity to travel and work alongside people from different abilities and backgrounds.

After stints working in the Pasadena (Texas) school district and as a rig welder for a boiler company, King took a job with Wyman-Gordon, a PCC Forged Products brand that manufactures structural forgings for airframe, nuclear, petrochemical, power generation, and space applications. There he earned a reputation for being the cocky young guy who worked his way up from the night shift to the day shift and into a lead position.

“I wasn’t welcomed by the old guys. Stepping in at 25 years old thinking I knew more than I actually did, because that’s how you are at that age. I was a little cocky, which is OK because it means you’re confident for the most part,” King said.

He said he stood out because he worked hard, fast, and had a drive to get things done. One day eight years into his stint at Wyman-Gordon, King’s boss asked him a simple question that, looking back, changed his entire perspective.

“He said, ‘What are you doing here?’ I said, ‘What do you mean? I’m working.’ He said, ‘You’ve got talent. Why not go out and do something for yourself?’ That really hit me. I couldn’t give him an answer as to why I was there, and I also couldn’t think of a good reason not to go out and try to do my own thing.”

King saved some money and bought a small Lincoln power source from Home Depot and started a side business making what he calls “cowboy furniture”—barbecue pits, deer feeders, rocking chairs. He was still working full-time at Wyman-Gordon, but business grew enough to where he had to hire a couple of people, purchase more equipment, and rent a small shop space.

Once his side business grew enough to start generating more money than he made at his day job, it was time to make a change. And it was a welcomed one.

“When I left my job I felt like I got the elephant off my chest. I had been running so hard for so long that I was out of breath. But I immediately got up and found that energy to put into my business 100% because it was mine.”

The fledgling company got the opportunity to step up in 2008 after Hurricane Ike tore through the Gulf of Mexico and slammed into southeast Texas. King recalls the gratitude he felt when his company was given the opportunity to rebuild the Kemah Boardwalk in Kemah, Texas, which the hurricane had completely destroyed. JK Welding accepted the million-dollar project, and he and his crew of more than 50 spent six months refurbishing the boardwalk and amusement park.

“We repaired restaurants; the entire boardwalk itself; installed countless light poles; and fabricated, galvanized, and installed thousands of feet of handrail. From there we rebuilt multiple airplane hangars at the U.S. Naval Station in Corpus Christi.”

More big, time-consuming, high-profile jobs came their way, like making critical repairs to the Battleship Texas in LaPorte, Texas. The more than 100-year-old warship is now a historic site and tourist attraction, but at the time it was taking on water and slowly sinking.

The more work they did, the more King was able to expand, including branching out into the oilfield business, starting a trucking company (which he sold in 2016), and scooping up a custom metal gate business called Trails West Gate Company, Chappell Hill, Texas.

JK Welding now resides in a 35,000-sq.-ft. facility in Cypress, Texas, with a 4,000-sq.-ft. climate-controlled area specifically for stainless and aluminum work.

Employee turnaround, King said, is minimal. His strategy is to hire individuals who not only have impeccable skills, but who are also respectful, responsible, and accountable.

“When we find someone who is not only knowledgeable in their craft but is also respectful, we find a way to up their pay and give them authority,” he said.

For as driven as King is, he expects the same from the men and women on his team. However, he does try and make sure his team feels valued and rewarded. He has giveaways each week where an employee can grab a company T-shirt, hat, or welding hood.

“I want them to feel appreciated here because I know what it’s like to work somewhere and not feel that way. These guys are extremely talented; they show up on time; and they are respectful, helpful, and creative. Those are things that should be rewarded.”

Today JK Welding does a bit of everything: stainless steel fabrication, pipe fabrication, oilfield skid fabrication, custom work, artificial lift systems, sheet metal fabrication, and platforms and railings, just to name a few. But King says his team really shines on the projects that are large, difficult, and require creativity.

One of those projects was a pirate ship for Royal Caribbean. The company partnered with Tiny Town Studios to fabricate and install what would eventually be Captain Jill’s Galleon, a pirate ship-themed water and adventure installation at CocoCay Island in the Bahamas for Roylan Caribbean’s cruise ship passengers.

Royal Caribbean didn’t provide any blueprints, just a concept. So JK Welding drew up a design for a 100-ft.-long, 55-ft.-tall pirate ship, fabricated the components, and shipped them to the island.

Another such project was the “Singing Ringing Tree,” an artistic installation that uses wind energy passing through precision-fabricated metal pipe to create musical notes.

“A new customer by the name of John Bird called me and said that he had a project and that eight other weld shops he called told him no. I immediately said we could help him. He said, ‘You don’t even know what I want.’ I told him that it didn’t matter. We’ll build anything.”

Bird flew two designers from the U.K. to Texas who had designed the original “Singing Ringing Tree” located in Lancashire, England. The wind-powered sculpture won the National Award of the Royal Institute of British Architects for architectural excellence in 2007. Bird wanted to install something similar in Manor, Texas.

“The ‘Singing Ringing Tree’ is made of 3,000 ft. of 6-in. pipe and weighs 54,000 lbs. The pipe starts out thick at the bottom to support the weight and it gets thinner gradually until the top three layers, which are all made of Sch. 10 pipe. Then we machined special holes in certain pipes so that it would catch the wind and make music.

“It was an epic project—probably one of my all-time favorites. Just talking about it gives me goosebumps. I’m proud that we said yes and had the talent and the capabilities to build it when eight other shops before us said no,” King said.

The latest large-scale project is the 45-ft.-tall, 30,000-lb. metal cross monument the company is fabricating for Pastor Tim Barker of Katy Community Fellowship church in Katy, Texas. He hopes to begin installation in early September.

Sure, large projects are challenging and not everyone has the equipment, building footprint, or manpower to take them on. King has built his business to ensure that he is able to pursue jobs of any scope and size and to say yes to the John Birds and Tim Barkers who come calling with unique requests.

“I take pride in the fact that we get phone calls from people with a big idea but they can’t figure out how to execute it or they can’t find anyone willing to do it for them. It’s those situations where my team and I are at our best.

“The excitement for me is taking on a project that no one else is willing or able to do. I’d put my 40 guys up against twice that of anyone else because they’re that good at what they do. I love the challenge and the creativity those types of projects require. I am proud of how far we have come in a short time and I know that I am just blessed to do what I do,” King said.

Thanks again to The WELDER for this wonderful feature article. Interested in learning more about JK Welding? Check out Manufacturing Today’s spotlight, “Weld As One: The Evolution of JK Welding“.