We are thrilled to share this truly inspiring cover story on JK Welding by Welding Productivity Magazine.

“Larger Than Life” by Susan Woods dives into the humble beginnings and the growth journey of JK Welding. Read the full feature below, or view the story in the digital issue. 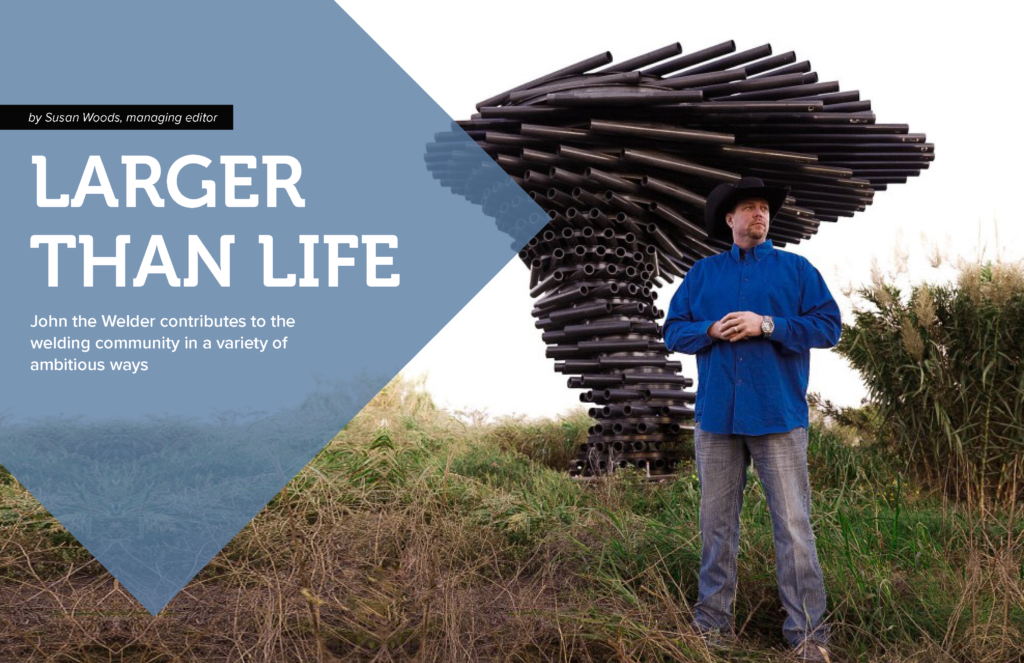 Need a life-size pirate ship fabricated or a hurricane-decimated boardwalk rebuilt? Have a welding-related project that might seem too big or too challenging for a run-of-the-mill fab shop? Whatever the job, JK Welding is the go-to shop for customized work that requires creativity and thinking outside the box.

The company is led by John King, a long-time welder and current business owner. King’s journey started as a one-man shop that developed into a full-service welding company offering custom fabrication, welding and metal repair in the welding shop and out in the field for commercial and industrial applications for customers in Houston, San Antonio, Austin, Dallas and the surrounding areas.

In 2004, King began his business with a single welding rig. Along with his creative passion for welding and fabrication, his goal was to increase his family’s income and also

“I started designing and making ‘cowboy furniture’ like horse stalls, cattle guards, gates, barbecue pits and lamps,” King says. “The business grew to where I was able to hire a couple of people, but I was still working full time at the forging plant. After about a year and a half, I just couldn’t handle the demands of a full-time job and the side job anymore. So, May 1, 2005, I quit my full-time job and took that leap of faith.”

The leap paid off, of course, and the new shop grew larger, moving to a 5,000-sq.-ft. space and adding even more staff and equipment. In 2008, JK Welding received its first big job after Hurricane Ike came through and destroyed parts of the state, including the Kemah Boardwalk in Kemah, Texas, which had been completely destroyed. King and his team stepped up to repair it.

The project lasted seven months and its completion furthered the company’s profile, which led to other big projects.

“Our projects just kept getting bigger and bigger,” King says. “We accepted the projects that no one else wanted anything to do with because they were intimidating. They didn’t have exact drawings or clear instructions on how to build it, and, as it turns out, people just have a lack of creativity and good design skills.”

A pirate ship for Royal Caribbean, for example, was designed, fabricated and built with no drawings or blueprints. And King is especially proud of the Singing Ringing

Tree located in Manor, Texas. The tree is truly a unique project. Constructed in 2016, this giant creation is made of 3,000 ft. of 6-in. pipe and weighs 54,000 lbs. It’s a wind-powered musical sculpture that has steel pipes arranged in a stacked swirl formation mimicking a tree bent as it’s blown by the wind. As the wind whispers through the pipes, a unique melodious hum is emitted.

“The customer told me he had eight weld shops turn him down before he found me,” King remembers. “I told him I knew we could help him because that’s what we do. Six months later, he said he gave me the job because of that confidence.

“Having a customer call about five other shops before they find me had become pretty typical,” he adds. “This last November, I got a call from NASA, asking about a large aluminum structure they needed repaired to display their Christmas lights at the space center in Houston. Without hesitation, I went and helped him the same day. Again, I was told I got the job because of my confidence and because I was able to respond so quickly.”

Other large, time-consuming projects include rebuilding the ‘Battleship of Texas’ in LaPorte, Texas, and the creation of a 50-ft.-tall, hollow metal cross monument for a church in Katy, Texas. Another fun example of King’s continual embrace of nontraditional work is a basic yellow school bus that he converted into a party bus for Texas A&M University.

Today, JK Welding is located in a 35,000-sq.-ft. facility in Cypress, Texas. The shop does a lot: custom work, pipe work, oilfield skids, artificial lift systems, sheet metal fabrication, structurals, and platforms and railings, just to name a few. A separate building with a 4,000-sq.-ft. climate-controlled TIG shop is specifically dedicated to stainless and aluminum work.

On the fabrication side, JK Welding has a 10-ft. shear; 250-ton, 13-ft.-long press brake; CNC plasma that cuts up to 1 in.; pipe rollers and pipe benders; 120-ton ironworker; and a robotic drilling and tapping machine that is magnetic.

“We also have a handheld beveling machine, which most shops don’t have,” King adds. The device is about the size of a grinder and is placed on the end of the pipe to create bevels in no time flat – 45 sec., to be exact.

JK Welding designed, fabricated and built this pirate ship for Royal Caribbean.
“I’ve invested a lot of money into new technology and equipment,” he says. “That has really helped us advance and get things done quickly, which is the way we like to roll.”

It’s not just the shop and the equipment mix that have grown, though. Today, JK Welding employs more than 40 workers. Welders have at least seven years of experience and most have 10 or more.

“We have a good reputation as company a that pays well, makes high-quality projects and is a cool place to work,” King says. “People want to get hired here.”

“Welders can leave their resume in the car,” he says. “We can tell in about 2 min. if they can weld or not. Sometimes, they don’t even strike an arc and we can tell they don’t know what they’re doing.

“It’s not just finding skilled workers, though,’ he laments. “It’s also finding workers who understand us and who are responsible and respectful. A typical fab shop has about five boxes of criteria and standards to check off to hire someone. JK Welding has about 12 boxes to check off. We feel like we’re a lot stricter than most shops, but we understand that and pay more than most shops out there.”

JK Welding also hires workers that offer versatility. Most shops typically have an opening for a fabricator or a welder, but JK Welding requires them to be able to do both.

“We need versatility so we can move faster with our projects,” King says. “We don’t have to worry about limiting ourselves because we have people that can float and fluctuate throughout the company. They know how to run various machines. We hire guys that are very versatile and have skill set levels that allow them to do anything, anywhere, anytime. They are superheroes. I like to think of them as the Avengers of the welding world.”

King stays incredibly busy, but he dedicates as much of his time as he can to inspiring the next generation of welders. He attends welding events and competitions affiliated with the Texas High School Welding Series to share his knowledge and expertise.

“A lot of the kids look up to me and my shop as a model for how maybe someday they can become successful,” King says. “I donate a lot of equipment and tools and a lot of my time to engage with them. Welding events like this didn’t exist when I was growing up. I like it because it really helps the kids today.

“I appreciate a kid today that is willing to learn a craft or a trade,” he continues. “They can see the opportunities to make money, whether they want to be a welding influencer on Instagram, a pipe welder out in the field or maybe even a business owner like me one day.”

A second reason King likes contributing to the welding series is because he believes it’s important for kids to see that a welder can become a business owner.

“It’s really special for me to say I was a welder like you for a long time, that I understand the work involved and now I’m a business owner that employs a lot of welders,” he says. “I always tell the kids that you can’t give up. You have to have confidence and drive, be creative and think outside the box, and be quick in your feet to make sudden decisions.”

After all, thinking outside the box is what helped King create his successful business over the past 16 years. Pursuing unique jobs that scare off other shops provides the challenge he needs to use his creativity and talents.

“Another thing that sets us apart from other weld shops is that they don’t have the ability to jump and jive the way that we do,” he concludes. “We move very fast. We have the ability to design and build things on the fly, sometimes even without drawings because we’re creative and ambitious. Whether it’s carbon steel, stainless or aluminum, we have the ability to design, fabricate, coat, machine and ship our creations to our customers. We’ll also send our own welders out to install them. No matter the job, it’s one contact and one invoice – and, of course, one common goal to do what others might consider too big to tackle.”